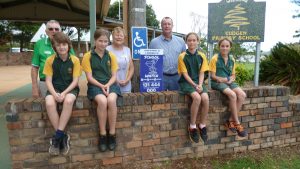 Tweed Valley Neighbourhood Watch over the last few months has been generating more schools into this Tweed NHW initiative of School Watch.

As it stands at the moment we have six schools participating with another three being investigated this program is designed to keep children’s parents plus the general public informed of the importance of keeping watch over our schools during school holidays, weekends, and the night hours.

Recently with the assistance of NHWA we have been able to print a very attractive brochure with our new School Watch logo plus a School Watch sign. This brochure carries very important messages advising the young folk about Social Networking and Online Safety. Page two covers the LOOK – LISTEN – REPORT information (download here) about the School Watch Program plus how to contact police telephone numbers and Crime Stoppers.

As well as this our NHW Volunteers phone the participating Schools every few weeks just to keep the contact open and check if all is well, plus the Combined NHW Secretary sends out safety hints for the schools to include in their Newsletters.

The important factor of the School Watch Program is keeping in touch and keeping the interest going.

Follow up is the name of the game. Show you are interested and the schools will stay interested. Also bear in mind we are also promoting NHW. 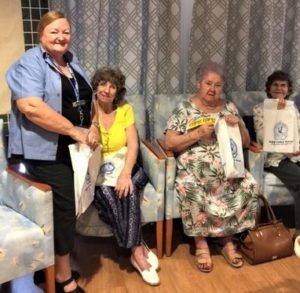 The ‘Safety for seniors’ information sessions being conducted by Tweed Heads Police are a crime prevention initiative which started in May 2014.

The information sessions cover topics including personal safety, home security, credit card fraud and scams and rorts, particularly those currently happening in and around the Tweed Heads and surrounding areas.

Most of the people living in and around the Tweed are good honest folk, just like you and I, going about their daily business. It is most unfortunate that there is a small element of people who are criminals.  Senior citizens are often targeted by the latter group and the aim of creating awareness by conducting information sessions is to increase awareness and keep people and property safe.

Tweed Heads Police have visited over 40 retirement communities, nursing homes, manufactured home villages (over 55s) and Clubs and Associations and talked with some 1200 senior citizens.

During the presentations, senior citizens often share stories and experiences where they have been victims of crime.  Some of these ‘stories’ relate to:

Everyone who attends an information session is provided with a sample bag of useful booklets and handouts which they can share with other senior citizens and with their families. Crime prevention is relevant to everyone in our community.

If you would like to book a Safety for Seniors Presentation for your community group just phone the Tweed Heads Police Station on 07 5536 0999 and ask to speak to the Crime Prevention Officer, Senior Constable Brad Foster.

Residents living between Tweed Heads and Kingscliff will now have greater access to after-hours GPs, as House Call Doctor has launched in the region.

Since December, a team of local doctors accompanied by chaperones have been on the road from 6.00pm weeknights, after 12.00noon Saturdays and all hours on Sundays or public holidays.

New South Wales state manager Phil Lagana said that House Call Doctor is pleased to be servicing residents from Tweed Heads to Kingscliff, as 2017 gets underway.

“There used to be a number of after-hours GPs operating within Tweed Heads,” said Mr Lagana.  “However, at least one of these doctors has reduced their service locations in recent years.”

“House Call Doctor will provide a valuable addition to local healthcare services,” said Mr Lagana.  “We can offer families peace of mind if they fall sick at unusual times of the night.”

A visit from House Call Doctor can be particularly crucial in medical situations that do not warrant an Emergency response, but cannot wait until normal clinic hours.

“Our doctors take detailed medical notes during their home visits, which are then sent to the patient’s regular GP by the next business day,” said Mr Lagana.

House Call Doctor CEO Wayne Ormond anticipates the service will grow into other parts of New South Wales, over the next 12 months.

“Across Queensland, House Call Doctor makes more than 20 000 after-hours visits each month,” said Mr Ormond. “We are pleased to be extending our services across state borders.”

For more information or to book an after-hours appointment:

House Call Doctor is available from Tweed Heads to Kingscliff, throughout the following times: 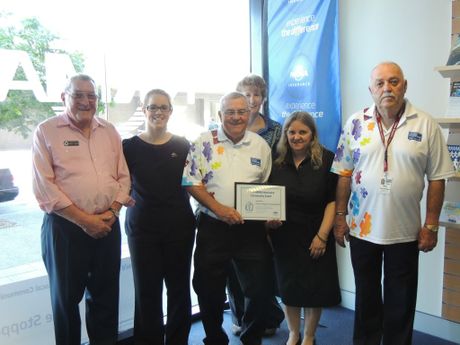 Crime Stoppers and Neighbourhood Watch have welcomed a community grant from NRMA insurance.

Coolangatta-Tweed Heads Crime Stoppers and Neighbourhood Watch Tweed Valley-Brunswick used the grant of $3247 to get more flyers printed and to purchase a marque.

Gordon Levenson, Neighbourhood Watch secretary of the combined groups, said the money would be used to help people engrave their valuable items with their licence number to help them be located if they were ever stolen.

Mr Levenson said the grant was fantastic and the program relied on the funds.

For some years now Tweed Valley Neighbourhood Watch (NHW) has been lobbying for Incorporation for its groups spread across the Tweed Valley and Brunswick.

At long last I am happy to report that Incorporation is now fact and for Incorporation purposes we are registered as TWEED VALLEY NEIGHBOURHOOD WATCH INC.

Why you may ask have we taken this direction? The simple answer; to apply for grants most organisations require the applicant to be incorporated. Neighbourhood Watch like many other organisations  needs money to exist these days, deliver events, to keep up with administration costs and the production of newsletters, website, etc.

It is no secret that a lot of our members have kept NHW groups afloat by putting their hands in their own pockets to keep the local community up-to-date on crime and safety issues, but products and equipment can be expensive and we need assistance from time to time from outside sources to keep up our work in a professional manner.

Tweed Valley NHW has a lot of dedicated members who put a lot of time in voluntary work with our organisation, but we are always looking for more to join our ranks, so if you are interested please make contact with your relevant area we would be happy to talk to you. If your area is not represented then we’d like to assist in you starting a NHW program in your area.

We must also bring to your attention to Geoff Provest MP who has helped greatly with behind the scenes work in our quest for incorporation and our thanks to him for his tireless efforts.

Your local Neighbourhood Watch groups are not only working with the public on face to face safety issues these days, but we are now involved with the Eyewatch programme that was came about well over a year ago to bring NHW into the 21st Century. This State Government/NSW Police initiative has now made it easy for the public to go online at home or mobile and be in contact with your Local Area Command and Neighbourhood Watch through the use of Facebook, Twitter and Youtube.

On behalf of all our groups in the Tweed Valley/Brunswick Valley we look forward to continuing our work with the community and feel free to contact us or our groups for advice on security issues or membership enquiries.

A joint investigation by Richmond Local Area Command and State Crime Command’s Gangs Squad has resulted in the arrests of two men for drug supply, and one man for drug possession.

In January 2013, Richmond Local Area Command’s Drug Unit commenced an investigation into the supply of methylamphetamine in the state’s north. Over the course of their inquiries, officers identified a local truck driver as a possible supplier of the drug.

Police will allege that on numerous occasions over the last three months, the man sold methylamphetamine to other drivers at various locations along the Pacific and New England highways.

Between 11am and midday yesterday (Wednesday 10 April 2013), Gangs Squad and Richmond detectives arrested three men, and seized more than 60 grams of methylamphetamine, at Roberts Road in the north-western Sydney suburb of Eastern Creek.

A 47-year-old man – a truck driver from Chilcotts Grass, near Lismore – was subsequently charged with two counts of supplying an indictable quantity of a prohibited drug. Officers also charged him for dealing with property suspected of being the proceeds of crime.

A 41-year-old man from Bligh Park in Sydney’s north-west was also charged with supplying an indictable quantity of a prohibited drug and possession of steroids, while a 49-year-old Bligh Park man was charged with drug possession.

The 47-year-old and 41-year-old were both refused bail to appear in Blacktown Local Court today (Thursday 11 April 2013).

The 49-year-old was granted bail and is scheduled to appear in Mount Druitt Local Court on Thursday 2 May 2013.

Police from Richmond Local Area Command also executed a search warrant at a property on Taylors Road, in Chilcotts Grass, yesterday afternoon, before arresting a 54-year-old woman who resides at the property. She was refused bail to appear in Lismore Local Court today.