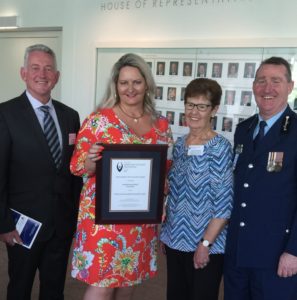 The ACVPAs recognise best practice in the prevention or reduction of violence and other types of crime in Australia.

“The educational resource gives examples of what situations match which emergency service and how the call needs to be made.

“Speak Up, which has been implemented following broad community consultation, addresses the lack of understanding and confidence in reporting crime.  All too often we assume people know how to seek help.

“Educating people on how to ask for help also encourages reporting and ensures police are being made aware of community safety issues they might not otherwise have been alerted to,” said Mrs Stonhill.

“To now have an Award Winning resource is a wonderful testament to the significant contribution we make to creating safe, connected and inclusive communities,” said NHWA President, Bernie Durkin.

These annual awards recognise the outstanding contributions being made across Australia for crime prevention, including the development and implementation of practical projects to reduce violence and other types of crime in the community.

“By addressing the communication break down between local police, emergency services and community members, the visual Speak Up resource produced in simple English is working towards reducing both violent and property crime in these remote communities.”

All projects are assessed each year by the ACVPA Board, which consists of senior law enforcement representatives from each state and territory police service, and chaired by the acting AIC Director.

“Northern Territory Police recognise the efforts of Neighbourhood Watch Australasia to improve personal safety of those who live in remote areas. The services we have in urban areas are often restricted and what we take for granted is not always the case when you live somewhere like Maningrida for example,” said Superintendent Read.
The awards are a joint initiative of the Australian, state and territory governments, coordinated by the AIC and co-sponsored by the Law, Crime and Community Safety Council.

For information about the Australian Crime and Violence Prevention Awards visit www.aic.gov.au/acvpa 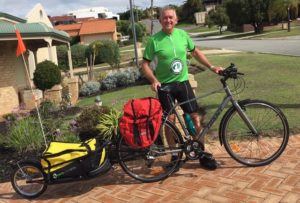 Bernie Durkin, NHWA President is cycling solo across Australia, to promote the importance of keeping Australia Safe. Connecting neighbours to neighbours along the way through Neighbourhood Watch.

Combining a passion for cycling and a passion for community safety is what has driven Bernie Durkin to undertake the biggest personal challenge of his life. Cycling solo across Australia to promote the importance of keeping Australia safe.

NHWA believes that getting to know your neighbours, those who live around you is one of the simplest and easiest ways to keep yourself and your community safe. Being aware of who lives in your apartment block, house next door or in your street, can enable the identification of unusual activities or traffic movements that may seem suspicious. Joining a NHW Group and working with policing agencies, is an easy way to contribute to ensuring everyone is safe.

Bernie plans to connect as many people as possible through the NHWConnect App (on line NHW group) on his 4,000 km ride from the west to east coasts of Australia. Leaving from Scarborough Beach, WA, on Saturday 25th February, Bernie plans to arrive at Bondi Beach, NSW by Saturday 8th April 2017. Bernie believes by promoting the simple actions of one individual connecting to another he can raise awareness that community safety is everyone’s responsibility.

Bernie is riding solo, with no support vehicle and only a small bike trailer of supplies. He is hoping that friendly road users will assist him by providing him with some water or supplies if he finds himself short of either. Sleeping in a tent, Bernie plans to be as self-sufficient as possible, but hopes the goodwill and community spirit of fellow Aussie’s will help him across the country.

Bernie will be tracked and have his daily safety monitored by NHWA. A blog will be updated three times a week and regular updates will be posted on NHWA Facebook, so that his progress and adventures can be tracked and viewed by you.

Watch out for fake parcel delivery scams this Christmas

Scammers are sending emails pretending to be from Australia Post or FedEx, to try and trick you into believing you have an ‘undeliverable package’. In some cases, these emails may include your name and address and include legitimate-looking company information, complete with fake logos.

The email may threaten to charge you a fee for holding your ‘undelivered item’, and will ask you to open an attachment, click a link or download a file to retrieve your parcel. If you follow these instructions, you will likely download a ransomware virus that locks your computer.

To unlock your computer, scammers demand payment in the form of bitcoins (a form of online currency) or wire transfer. Even if you pay the fee, there is no guarantee that you will be able to access your computer again.

Australia Post will never call you out of the blue to request payment or send you an email asking you to click on an attachment.

If you receive an email about an un-deliverable package, don’t open any attachments or download files – delete it straight away!

Find out more at Scamwatch.gov.au

It is a common myth in the community that people have to wait 24 hours to report a person as missing—this is not the case. Report your concerns to police immediately.

Anyone, regardless of gender, age, ethnicity or educational background, may become a missing person; however, adults are more likely to be listed as long-term missing persons.

For more information, and to view profiles of missing persons in Australia, visit www.missingpersons.gov.au.

In this section we look at ways to start talking with children and young people about their use of technology.

Do you know how your computer find the websites you are looking for?

Could you explain in simple terms how the internet works?

How accurate do you think search engines are?

Did you know that what you do on the internet can be tracked back to you?

When you get your first car, your parents or guardian usually explain how the engine works, how to change a tyre and check the oil. Once you pass a test, you are able to get your learners permit and drive supervised, until you are ready to get your driver’s licence. Today, however, many of us pick up a device (or hand one to our child) and start using it without fully understanding how it works and how we can stay safe.

This month, we’ve been looking at how the technology we use every day actually works. You can check out some of our videos on geotagging and wireless networks on the ThinkUKnow Facebook page. In this e-newsletter, we’re going to look at some more of the basics of how the technology, we often take for granted, works.

Without getting technical, the internet is a network of networks, connecting computers and other devices to each other. These connections require physical elements (hardware) such as personal computers, servers, routers and cables.  The physical components are useless without a common set of rules for communicating with each other (protocols).  These protocols allow devices to speak a common language and share information with each other.

While many people think the internet provides them with anonymity, they can be identified through their internet connection. As such, it is important that children and young people understand that they need to be accountable for their actions online.

How do search engines work?

We’ve all done it; had a question and typed it into a search engine and within seconds, there is a list of pages that help provide answers. So, how did the search engine find all of that information so quickly, and what determined the order of the results?

The most common process involves a search engine sending out software known as web crawlers that travel across the internet collecting information about web pages and adding them to its index. When you enter a query in a search engine, it doesn’t search the internet for results, but the index it has created on the internet. Each search engine uses its own algorithms to determine the results shown to you. These algorithms are based on the relevance of the page to your query, how many other sites link to that page, how popular it is, how current the content is, and what your previous searches have involved.

For these reasons, typing the same query into different search engines, or even the same engine on different devices, may create different results. The number one result of your query may not be the best answer to your question, only the result which the search engine thinks will be most relevant to you.

This article is a reproduction of the ThinkUKnow August 2015 newsletter.