Product Safety Week is on during 7–14 October 2013, with activities happening around Australia and online to raise awareness about making safe, buying safe and using safe products.

There’s something for everyone during Product Safety Week – consumers and businesses alike: parents, kids, safety experts, compliance professionals, small, medium and big businesses, and anyone else who makes, buys or uses consumer goods.

Find out more about Product Safety Week on their website. 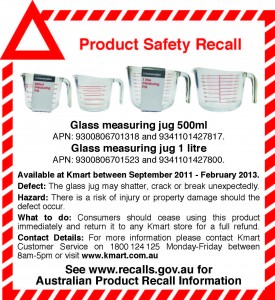 There’s been a recall on Kmart Homemaker 1 litre and 500 ml glass measuring jugs which can break unexpectedly posing risks of injury and property damage.