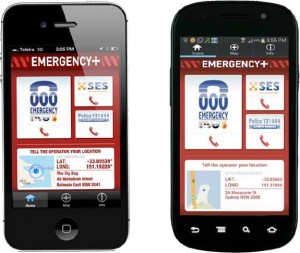 Emergency services have launched a new smartphone app to help Australians call the right number for help in emergency and non-emergency situations.

Emergency+ was launched today by the Minister for Justice, Michael Keenan, at the City of Sydney Fire Station.

Developed by the Triple Zero Awareness Work Group (TZAWG), a national body that represents emergency call-taking agencies and their government and industry partners throughout Australia, the app was developed in response to a number of problems experienced by emergency call-takers and emergency services officers.

The TZAWG has identified that more than 66% of incoming calls to Triple Zero (000) are now made from mobile phones.

However, mobile callers often do not know exactly where they are, meaning call-processing times are longer and call-takers are then unavailable to take the next incoming emergency call.

Operational Communications and Information Commander, Assistant Commissioner Peter Barrie, said the most critical piece of information emergency call-takers need is the exact location of the caller.

“If a Triple Zero (000) operator doesn’t know where the caller is, they can’t send help,” Assistant Commissioner Barrie said.

“Location is the first and most important thing we need to know. If we at least have that, we always have a starting point.”

The Emergency+ app uses the existing GPS functionality of smartphones to enable callers to provide emergency call-takers with their location information as determined by their smartphone.

When activated, the built-in accessibility features of a smartphone will describe aloud what appears on-screen, so a caller can use the app without seeing it.

The Emergency+ app provides users with the contact numbers and a short explanation of when to call the non-emergency numbers such as the Police Assistance Line and the SES national number.

This is to help members of the public dial the correct number, and reduce the number of calls to the Triple Zero service that should be directed to another service.

The Emergency+ app is available, free of charge, on iOS and Android devices through the Google Play Store and Apple App Store.