The ACCC is warning the community to be wary of scammers trying to ruin their Christmas holidays.

“Scammers often try to take advantage of people during the busy Christmas period and prey on our vulnerabilities at this time of year. For example, they may take advantage of you looking for a good deal on a family holiday, searching for a loved one’s present at an online store, or even that you’re expecting a present from someone through the post.”

“Your personal information is often just as valuable to a scammer as your money so always be careful about the information you give out online,” Ms Rickard said.

“There are some simple tips you can follow to stay ahead of scammers these holidays.”

“If a deal seems too good to be true, it probably is. Do your research on any online stores you’re using, especially if it’s for the first time. Never do a deal or make a payment outside the online auction site you are using. If you are buying from a classified website only hand over the money when you have physically inspected the goods. Finally, never open attachments or download files you receive out of the blue—no matter who the email comes from or how legitimate it looks,” Ms Rickard said. 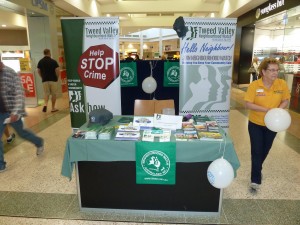 A lot of interest was shown by the public and several NHW volunteers were on hand to talk to to the shoppers, hand out safety tip brochures and discuss with passer-bys how best to protect themselves, their homes and their local neighbourhoods.

Neighbourhood Watch Australasia kindly provided UV Security marking Pens for people to mark their valuables, caps, informational brochures and other safety material which were all very popular on the day.

The day was a great success and we are planning another Information Day Kiosk soon.

Special thanks to Tweed City Shopping Centre management for providing us the floor space to get the importance of safety and security out to the general public.

Australian consumers are increasingly going online to buy goods and services, taking advantage of the speed, convenience and greater choice that the internet can offer. Unfortunately scammers like shopping online for their victims too.

Scammers are increasingly sophisticated in how they deliver scams, taking advantage of new technologies and communication methods to try and slip under your radar. Scammers exploit the anonymous nature of the web to target Australians buying and selling online.

National Consumer Fraud Week 2013 is all about helping Australians to ‘outsmart the scammers’ by staying one click ahead!

Online shopping scams target both buyers and sellers, with the two most common scams being:

Classified ad scams – a scammer posts a fake ad on a legitimate classifieds website for cheaply priced popular items. If a consumer shows interest in an item, the scammer will claim that the goods will be delivered following receipt of payment. If the consumer pays, they will not receive the goods or be able to contact the seller.

Overpayment scams – a scammer will respond to a seller’s ad with a generous offer and will then ‘accidentally’ overpay.  The scammer will ask the seller to refund the excess amount by money transfer in hope that the seller will transfer the money before they discover that the scammer’s cheque has bounced or that the money order was phony. The seller will lose the money, as well as the item they were selling, if they have already sent it on to the scammer.

Stay one click ahead of the scammers – visit the SCAMwatch website to find out more about how scams work, how to protect yourself and what to do if you’ve been scammed.

Fill out the 2013 scam survey & help in the fight against scams!