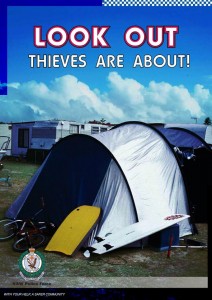 Look Out. Thieves Are About.

With school holidays approaching, and an influx of visitors expected, Tweed/Byron LAC have issued a reminder for holiday makers.

Along the lines of the Lock It or Lose It campaign Tweed Valley Neighbourhood Watch remind residents and visitors to our beautiful region to stash their valuables when not attending their camping site and not to leave valuables in plain sight in their vehicles.

Opportunistic theft in the area has been known to spike during holiday season and thieves will mark our region as a soft-target. So don’t make it easier for them by inviting theft. Everyone deserves a safe and grief-free holiday.

Tweed Byron Local Area Command would like to advise the community during this holiday period to ensure their belonging are secured and locked away.

Historically during this time of the year items such as push-bikes, surfboards and small personal belonging that are not secured out-of-sight are targeted.

Please be aware of where your belongings are and ensure they are secured.

Surf Life Saving have warned people to watch out for marine stingers as blue bottles washed up on Tweed beaches yesterday.

Snapper Rocks was host to a number of the blue bottles.

There were also reports of marine stingers drifting along in the Tweed River.

Nicole Hartman was walking along the beach yesterday morning and noticed the jellyfish.

“They were all along from snapper to North Kirra,” she said.

Natasha Faux said that the stingers weren’t just in the ocean.

“Heaps of big jellyfish in the rivers today,” she said.